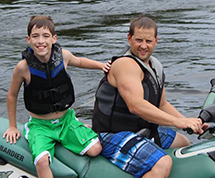 As most boys do, Mandarin resident Tyler Hangartner had big plans for his birthday this year. But even though he turned 12 on August 22 and celebrated it with his family, the bigger birthday celebration is yet to come. On November 16, the day that someone’s selfless donation of bone marrow cured him from a devastating disease two years ago, Tyler will be celebrating his second birthday, too.

Since his birth, Tyler and his mother, Carrie Stowell, have been surrounded by numbers. He was born three months early, and spent three months in the NICU. As a preemie with several health problems including holes in his lungs and heart, he was only given a 10 percent chance at survival. At four months old, after his mother had a suspicion that something wasn’t right, his hemoglobin count was 5.6, not a normal number over 11. And after a number of tests, and a diagnosis of Congenital Dyserythropoeitic Anemia (CDA), Type II, Tyler’s family found out he was only one of a few hundred people in the world with the disease. He went on to have more than six surgeries and over 140 blood transfusions, averaging one every three to four weeks.

CDA is a blood disorder that’s caused by both a deficit in number and quality of red blood cells in the body due to a malfunction in the bone marrow. When there are too few blood cells circulating, the body is unable to get adequate level of oxygen. This lack of oxygen causes severe anemia, which is fatal if left untreated. For the first decade of his life there was no known cure for the disease, just an endless series of blood transfusions to keep him alive. By the time Tyler turned 10, he and his family were wearing out.

That was when the most important numbers appeared. In the spring of 2012 his hematology/oncology team at Wolfson Children’s Hospital informed Tyler’s family that a bone marrow transplant – a newly recognized treatment for his rare condition, but risky – was probably his best option. They ran him through the bone marrow registry to see if they could find a match, and what they got was a perfect 10 out of 10. Somewhere in the world, someone had signed up and was the perfect match for Tyler. Carrie knew it was a sign.

“I had been praying about if this was the right avenue to go down, making the choice to put my child’s life in immediate danger with a transplant,” says Carrie. “But when it was a perfect match, it was confirmation for me that it was. Our chance was being given to us.”

At the end of October, Tyler checked in to his special isolation room in the bone marrow transplant unit at Wolfson Children’s Hospital to begin two weeks of chemotherapy. Because he had a perfect donor match and did not have cancer cells to eradicate, a less intensive chemotherapy regimen called non-myeloablative therapy was used to suppress his immune system enough to allow the donor cells to graft with his body. The drugs made him nauseous and tired, gave him sores in his mouth and a rash, and made him susceptible to the tiniest of germs. His special hospital room was equipped with reverse airflow and special filters to keep the air as clean as possible, and visitors could only talk to him through a protective glass wall or had to suit up in a gown, gloves and mask to be around him. On transplant day, the doctors and nurses sang “Happy Birthday” to Tyler, and hung a banner to commemorate it.

“He did very well during the transplant process,” says Michael Joyce, MD, PhD, pediatric hematologist/oncologist with Nemours Children’s Health Jacksonville and medical director of the Pediatric Bone Marrow Transplant Program. “He tolerated the therapy well, and didn’t have any major infections.”

Carrie noticed that when the bag of marrow was brought in, it had the words “volunteer donor” stamped on the side. The thought of what another person – a stranger – had done to try to cure her son took her breath away.

“I stood there in awe,” she says. “This person sacrificed to provide life for my son. I cannot feel any more blessed than this. It has to be the single most selfless, giving act, and I don’t even know who he is.”

Tyler spent another month in the hospital while everyone waited to see if his body would accept the donation. The process in which the blood stem cells begin to produce healthy blood cells is called engrafting and usually takes two to three weeks, according to Dr. Joyce. When his numbers were good, he was released to go home just in time for Christmas, but was on a strict diet, couldn’t leave home without a protective mask, and his entire house had to be sanitized, steam-cleaned and the AC system replaced with special filters added to make the environment safe as his immune system regenerated.  He was also on more than 20 different kinds of medications, some of which made him sick and at one point, caused seizures that sent him back to the hospital.

Through it all the family hung tough, waiting the customary 100 days post-transplant for his immune system to regroup. On day 99 he got special permission to attend a monster truck show in box seats complete with his favorite food, which he waited a very long time to eat.

As Tyler plans his second birthday party in November, he and his family are hopeful that they will finally get to thank the person who saved his life. Due to registry regulations, donors and recipients (if one is from another country) are not allowed to contact each until two years after transplant. The family has signed all the necessary paperwork facilitating contact once time is up, and hopes that they will get to talk to the 31-year-old man who went above and beyond to give the precious gift of life.

“We’ve had a number of patients who, without finding a generous donor who is a match, would not have been cured from their disease,” says Dr. Joyce. “Helping to cure someone with a serious disease is very rewarding not only for the recipient and family but the donor and the medical team taking care of the transplant patient. Registering to be a donor with the National Marrow Donor Program can save someone’s life!”

Tyler’s life these days consists of going to school full time, participating in Boy Scouts and contemplating taking a karate class – not sitting in the hospital getting blood transfusions.

To find out if you are eligible to donate life-saving bone marrow, please visit www.bethematch.org.