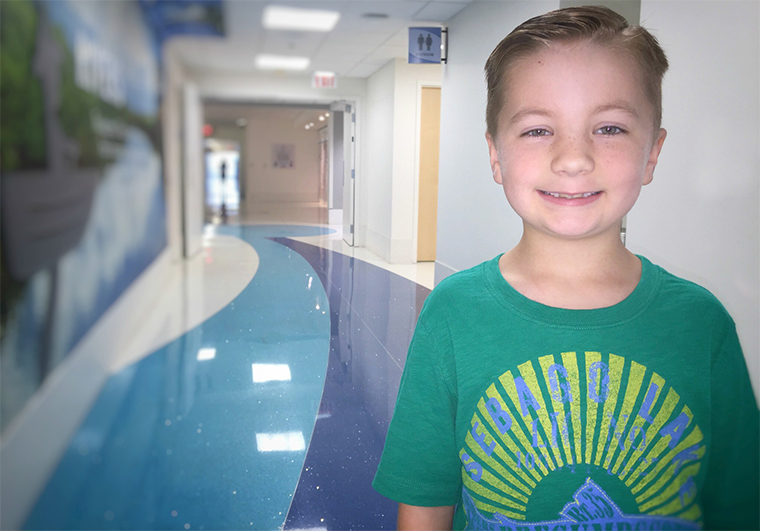 When 7-year-old Evan had a seizure in April after a bump to his head, his mother Johanna, who is a nurse, thought he had a concussion. But the following day when he had trouble speaking, she knew it was something more serious and rushed him to Wolfson Children’s Hospital.

Tests showed that Evan was bleeding in his brain from a leaking cavernous malformation (CM), an abnormal tangle of large and small blood-filled vessels. Because his CM was close to the brain’s surface, doctors suspected the bump to his head was the reason it began to bleed, requiring its removal. Before the surgery, however, Evan underwent a special brain scan called functional magnetic resonance imaging (fMRI) that showed where it was safe to operate without interfering with brain function. By pinpointing exact locations that control functions such as movement, speech, hearing, sensation and vision, neurosurgeons can target treatments for patients with conditions that require surgery, promoting more successful outcomes and reducing the risk of damage to surrounding tissues.

“We have a general idea which areas of the brain these functions reside in anatomically, but the actual places can vary in exact location from person to person,” said University of Florida College of Medicine, Jacksonville pediatric neurosurgeon, Philipp Aldana, MD, co-medical director of the Walter and Michelle Stys Neuroscience Institute at Wolfson Children’s Hospital, and medical director of the Lucy Gooding Neurosurgery Center. “Having the ability to map out those areas in relation to where a brain tumor is located, for example, helps us more accurately target our surgical approach.”

Evan’s test showed that his speech center had actually migrated to another location in his brain, which has essentially re-wired itself to avoid the mass. His neurosurgeons then knew it was safe to go in and remove the CM without it interfering with his speech or movement abilities.

The addition of new, specialized imaging equipment and software to the 3 Tesla MRI machine is what allows pediatric neuroradiologists and neurosurgeons at Wolfson Children’s Hospital to get these detailed images of where specific functions originate in the brain. fMRI works by using the magnetic field of an MRI machine, along with special software and equipment to measure decreased oxygenation in areas of the brain, an indication of increased blood flow where activity is occurring as a result of particular stimulation. Awake during the procedure, patients are asked to complete certain tasks during imaging such as reading text off of a monitor, watching flashing colors or symbols, or moving a certain part of the body. In the centers of the brain that control these functions, blood flow increases using up more oxygen, and shows up on the MRI images as clusters of color that identify where they are.

Whether the brain mapping is to determine where a tumor is located and how to safely remove it or to find what area should be treated to manage epilepsy (seizures), fMRI can mean a less invasive approach to determining this important information.

“For children who need epilepsy surgery, we typically perform an intra-operative procedure to locate the parts of the brain that must be avoided in surgical resection, which can be a difficult and frightening procedure for them,” said Raj Sheth, MD, pediatric epileptologist with Nemours Children’s Health, Jacksonville, medical director of the Pediatric Epilepsy Center at Wolfson Children’s Hospital, and co-medical director of the Stys Neuroscience Institute. “The fMRI allows some of this testing of language, motor function and visual function to be done before surgery, which is less invasive and scary.”

Chetan C. Shah, MD, pediatric neuroradiologist with Nemours Children’s Health, Jacksonville, and Wolfson Children’s Hospital, said, “Because MRI studies are magnetically based, visual artifacts sometimes show up on the images, so it takes a well-trained eye to pick out the accurate data. It’s a very time-consuming, complex process that requires a specially trained neuroradiologist like myself to be present during the neuroimaging procedure to ensure enough data is collected, and to sit down afterwards to process 30,000 images on a specialized software to compare, study and recommend what areas are safe to treat.”

Working with young children who may not stay as still as an adult would can skew results, so having many images to compare helps to further clarify the most accurate results. Since patients have to participate in tasks during the procedure that require following directions, cooperation and a basic educational level to understand, fMRI generally is not used on children under six years of age. In certain cases, however, younger patients can be sedated for particular imaging tests, such as having a foot or arm manipulated to cause a response in the area of the brain that governs functions in those areas of the body.

For children over age six, Wolfson Children’s Hospital has a Child Life specialist on hand in the Pediatric Radiology Department to keep them calm and focused. Young patients also can participate in Wolfson Children’s successful MR-I Am Ready! program, which allows them come in before the day of the procedure to be introduced to the sights and sounds they will see and experience during their MRI. For example, patients are given the opportunity to practice by lying still in a play tunnel while hearing the sounds of an MRI scanner, they are shown pictures of the actual room and machine, and have the Child Life specialist explains the sequence of events so nothing comes as a surprise. Then on the day of the test, the Child Life specialist is there to be a comforting and familiar face.

“How a child does during the procedure really depends on the child, but preparation is the key to success,” said Holly Allsopp, BS, CCLS, CPST, a dedicated Child Life specialist for Pediatric Radiology at Wolfson Children’s, who works with these patients.

The fMRI software and additional hardware, including the monitors used by both patients and the neuroradiologist, were made possible thanks to the technology support endowment funded by proceeds from the Wolfson Children’s Challenge.

“Treating children with neurological or neurosurgical conditions requires a team approach of neurologists and neurosurgeons, as well as this special technology that must be used with the expertise of neuroradiologists who conduct the test and interpret the findings,” said Dr. Aldana. “That’s what patients get at the Walter and Michelle Stys Neuroscience Institute at Wolfson Children’s Hospital.”

Although Evan has to avoid contact sports, he’ll be able to enjoy a normal life. When he began his second grade year at Yulee Primary School in mid-August, Evan had a cool story to tell his friends, and a neat little scar to prove it.