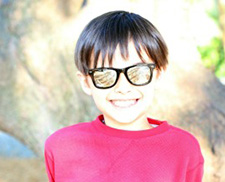 Your brain is amazing. No matter who you are, how old you are, what you know or what you don’t know – the complex neurological pathways and network of arteries and veins all working in harmony is almost too much to wrap your head around.

When you’re born, all of that awe-inspiring mechanics is bundled up into three-quarters of a pound. It’s impossibly small and, almost all of the time, your brain simply knows what to do, where to connect and how to grow.

At nine years old, Caleb already knows more about his brain than most adults. He knows what happens when the intricate connections don’t sync up, when the web of blood vessels becomes a knot.

Sitting in the car with his dad on a Saturday, Caleb complained of a horrible headache.

“They were in the parking lot at the mall,” said Claire Diao, Caleb’s mom. “Joseph, my husband, called and said Caleb had a headache and then vomited. We thought he might have a stomach bug, but when he wouldn’t respond we knew we needed to take him to Tallahassee Memorial.”

Caleb was suffering from bleeding in his brain, caused by a ruptured arteriovenous malformation (AVM), a tangle of abnormal blood vessels connecting arteries and veins, in his left frontal lobe that was bleeding.

“Caleb arrived with classic symptoms of AVM hemorrhage (bleeding), but unfortunately these symptoms can be attributed to other ailments. It was critical that Caleb’s family came straight to us,” said Dr. Matthew Lawson, an endovascular neurosurgeon at Tallahassee Memorial. “I performed a CT scan that confirmed a large hemorrhage. Then I performed a CT Angiogram, a test that looks specifically at the blood vessels in the brain, which revealed the AVM.”

What Dr. Lawson did next saved Caleb’s life; he made a call to Dr. Alexandra Beier, a pediatric neurosurgeon at Wolfson Children’s Hospital. Tallahassee Memorial and Wolfson Children’s are affiliated organizations, creating a connection of care that bridges the panhandle of Florida.

“Dr. Lawson and I communicate often,” said Dr. Beier. “We were developing a plan of care for Caleb before he was even transported to Wolfson Children’s Hospital. Dr. Lawson shared Caleb’s scans and prepared him for the care he would receive when he arrived.”

He was rushed to the endovascular suite where Dr. Beier and Dr. Hanel could examine the AVM in detail before transferring him next door to the operating room. Caleb underwent a successful craniotomy, open-skull brain surgery, to remove the AVM and hemorrhage, which controlled the bleeding.

“Even though the experience was terrifying, we feel lucky for so many reasons,” said Claire. “We feel lucky that the seamless partnership between Tallahassee Memorial and Wolfson Children’s Hospital exists, that Dr. Lawson, Dr. Beier and Dr. Hanel were able to save Caleb’s life and give him a complete recovery.”

“On his last day at Wolfson Children’s Hospital, Dr. Beier came in to check on Caleb,” remembered Claire. “He was already up and standing in the doorway when she walked in. She reached down to check his head and he ducked out of the way and ran around her. We knew then he was OK, he was back to his old self. We feel very fortunate."